Australian designed and engineered, the Baintech Lithium Battery range come with a 5 year warranty. The BTLITH12110-SL-DCS model contains one (1) grey Anderson plug connector and one (1) blue Anderson plug connector, accessible from the side of the battery. The grey connector can be used as input and output for charging and running loads.

In stock (can be backordered)

110Ah Slimline Lithium Battery with in-built 20A DC-DC Charger – the lightweight and slimline battery is constructed using the latest generation prismatic lithium ion phosphate cells and an inbuilt Battery Management System (BMS). This slim-shaped battery is perfect for tight spaces in RVs, caravans and 4WDs, such as behind seats.

The Slimline battery provides up to 100A of continuous discharge or charge and can be stacked in parallel to increase amp hour storage capacity. Charge and discharge via the grey Anderson plug and charge from a DC source via the blue Anderson plug.

A strong aluminium enclosure delivers a safe, lightweight and powerful unit which is the perfect building block for next generation battery systems. 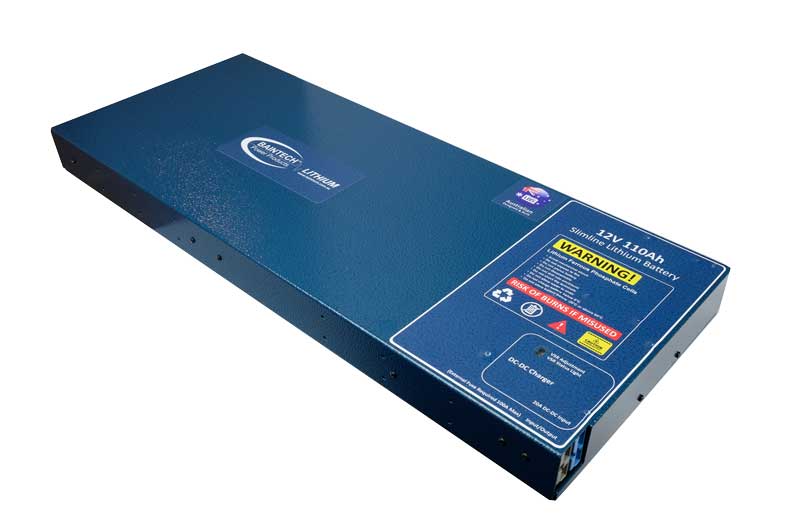 Why are our lithium batteries are superior to others in the market:

When considering the usable capacity and lifespan of lithium batteries, they work out cheaper than lead acid. When you add the cost and inconvenience of refitting new lead-based batteries every few years the total cost of ownership over the long term is far better with lithium batteries.

Lithium batteries are rated for 2,000 – 5,000 cycles and much more if used carefully, giving you several times the life expectancy of standard lead acid batteries

Lithium batteries are less than half the weight of the equivalent lead acid battery.

Lithium batteries charge more efficiently, and don’t require as many stages during charging. Therefore, they will charge faster, and hold more of the energy from solar panels and other charging device

Do I run a cable from the start battery to Blue Anderson on the unit?

Yes, the only thing you need to do is put a 30 amp inline fuse at the Start battery end of the joining cables.

Do I need an isolator on the start battery or just a fuse since this has an inbuilt DC-DC Charger?

No, you don’t need an isolator as the battery has a Voltage Control Relay ( Isolator ) Built-in that Engages at 13.2 V and Disengages at 12.7 volts so as not to draw power from the starting battery when the engine is not running.

How can I put solar input into this unit? Do I need an MPPT?

Yes, you need some source of regulated solar either a PWM or MPPT or in some cases portable blankets and foldable panels have a regulator already built-in so you can connect directly to the Grey Anderson Plug. All Baintech Solar Blankets come with a PWM.

Do I use the Grey Anderson plug and have a split between outputs/loads and solar input?

The Grey Anderson plug in the Battery is connected directly to the internal battery cells, This means you can put power in and take power out of this connection exactly the same way as Pos and Neg terminals work on a conventional battery.

The easiest way to do this is to use an Anderson Parallel/splitter cable such as our BTA2AP0.5 which turns the single connector into TWO so you can run 1 as input and 1 as output. The other way is to run the grey Anderson to a distribution panel and connect you solar and devises to the panel.

How do I mount the battery?

The Batteries come with 1 set of Brackets included. if you require extra brackets they can be purchased separately.

Yes, you can parallel up another 110 Slimline – giving you a total battery bank of 220Ah. By combining the two batteries it will also increase the current flow capability from 100 Amp to 200 Amps continuous. This will allow you to run an inverter up to 2000w which covers you to run a small microwave.

The Slimline battery voltages below are a useful guide:

If the battery is unintentionally discharged flat then it can be recovered?

First remove all loads sources and switch off the LED voltmeter. Apply a ‘dumb’ charger which charges the battery without needing to ‘see’ the battery first.

How do I look after my battery for a long battery life?

Keep it charged at above 13V at all times. Check the battery once a month.

How to care for my Lithium in storage?

All batteries, whether they are lead acid or lithium degrade faster in extreme cold and extreme hot environments. a. Do not charge battery when the ambient temperature is less than zero or above 45o C. b. Do not operate the battery in environments are -20o C or above 60o C. Doing so would reduce its life expectancy.

Will the battery be damaged if allowed to fully discharge?

Firstly, the BMS has a low voltage disconnect at around 10.5V, so the battery will never discharge to zero volts. If the battery is flattened and cuts out at LVD at 10.5V then it can be recovered without damage if on occasion. If it is done repeatedly then it will have a negative impact on longevity. Maintaining the battery charge at 13V or higher will maintain good battery life. Look after your lithium battery and it will give you many years of service.

What does my BMS do?

The BMS is an electronic solid-state circuit board which manages the cells and protects the battery across a range of scenarios which primarily includes over charge and over discharge protection. Unlike lead acid batteries, over charging or over discharging a lithium battery may lead to a hazardous scenario. Therefore, the BMS is the heart and soul of a lithium battery.

The Slimline battery BMS is a highly reliable solid-state device which is primarily designed to keep the cells safe and the overall pack from being damaged by excessive voltage or excessive discharge event.

How can I install my battery?

Mounting orientation: The Slimline battery can be mounted flat or on its side in any orientation, except upside down with the Anderson plugs at the top – in this configuration the internal cells are upside down which is against the manufacturer’s recommendations. This is the only orientation that is not allowed.

One of the advantages of lithium batteries over lead-acid batteries is longevity. If you want to realise the long life potential out of your lithium battery then consideration must be given to depth of discharge. A battery lifespan is rated by the number of cycles before the original capacity has reduced by a certain amount; a cycle is defined as discharging from fully charged, to a percentage Depth of Discharge (DOD), and then charging back to full again. So, DOD describes what percentage of the battery capacity is being used each time. Note: DOD is different to State of Charge (SOC, also known as Charge Level); in fact, they add together to 100%. So, 80% DOD equates to 20% SOC. The less DOD you use each cycle, the longer the battery will last. This fact should be considered when choosing the battery Amp hour capacity. You will have a higher return on battery investment if there is enough capacity at hand such that you are not heavily discharging the battery on every cycle. Extra capacity ensures lower DOD, extended life and a higher financial return on your investment. BAINTECH batteries have a cycle life of 5,000 at 50% and 2,000 at 80% DOD.

The maximum window of acceptable operation is 0-45o C. If you regularly operate outside of this suggested range, you should consider changing the battery location or actively cool or heat the environment in order to preserve battery life. If the ambient temperature that the battery operates in is greater than 60o C you should cease use immediately.

Does the battery capacity degrade over time?

Yes, all batteries degrade slowly over time, even with no load sources connected. Storage temperature is important to degradation. Roughly every 10o C above ambient 20o C doubles the degradation rate. Cool ambient conditions are better as it slows down degradation rate.