Luck was again not on our side, as before we had even entered onto the beach, the second belt cried enough and snapped as well. This left us no option but to tow Paul back up the beach. We quickly took out our trusty tow rope to tow Paul.

Luck was again not on our side, as before we had even entered onto the beach, the second belt cried enough and snapped as well. This left us no option but to tow Paul back up the beach. We quickly took out our trusty tow rope to tow Paul. 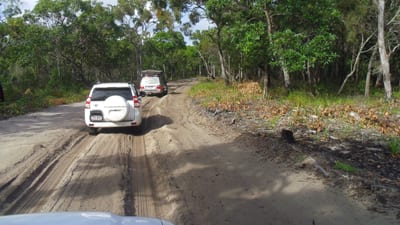 We hooked up the rope and once again with the use of our hand held two way radios, we were able to communicate with Paul and tow him safely. Whilst towing the Mazda BT50 did place more strain on our Toyota LandCrusier. Once we got the vehicle up to a comfortable speed, we locked the Torque Convertor up in third gear with the flick of a switch and watched the temperature of our automatic transmission sit at a comfortable 75 degrees, as we monitored all the vital signs on our gauges. We were confident that the oils that we were using in our LandCruiser would keep everything running smoothly as we had recently serviced our vehicle and replaced all the fluids with top of the line fully synthetic products, including the automatic transmission fluid as well as the engine oil and the transfer gearbox and differentials.

Unfortunately, most manufacturers have ‘sealed for life’ automatic transmissions and people neglect to service these components. Remember our Four Wheel Drive vehicles are subject to more extreme conditions than ordinary vehicles and all oils should be replaced on a regular basis. I live by the old adage ‘oils are cheap, engines and mechanical components are expensive’. Apart from our oils and fluid we also replace all the filters. We also carry a complete hose and belt kit to suit our vehicle and this is supplied with all the correct components in a convenient bag which is easily stored under the seat and provides peace of mind should anything happen on the trail. 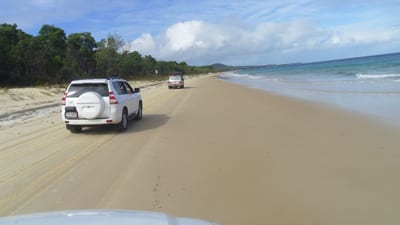 It was actually a rather pleasant drive up the beach to Tangalooma, however, we were ever mindful of the tides and had to get a bit of a move on if we did not want to get stuck in the middle of the island. On reaching Tangalooma Resort, we thought that we would try our luck once again and ask if they had a spare belt for the Mazda. Our luck was in this time, as they did indeed have a belt that fitted and after a bit of a ‘wiggle’ we at least had one belt on and the Mazda could be driven under its own power.

It was getting a bit late in the afternoon and the management kindly opened the gate and allowed us to traverse through the back of the resort, thereby cutting out the bypass road and saving us a lot of time and effort, which was greatly appreciated.

Once back on the other side of the resort, it was a quick run once again up the beach back to or campsite.
Paul had an interesting talk on the products that Bainbridge Technologies supply and showed us the set–‐up of his own vehicle with regards to a new product called the Power Top which is essentially a portable power system, set up and ready to go. With various options available from USB to cigarette lighter sockets and even their own unique LockOn socket which stops the leads from falling out due to vibration. 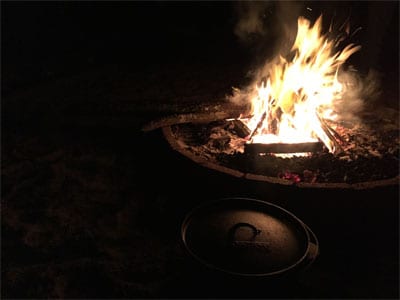 Once settled in, we again got the kitchen fired up and were ready to eat. There were a few other interesting guests from various locations around the world and so after dinner we settled in around the campfire with some wood that Dave had kindly brought from his farm. You are not allowed to collect any firewood on the island, so this needs to be planned in advance.

The rain came shortly after and so we once again retreated to the shelter of the dining area and again returned to our various discussions. Paul arranged to undertake a spot of early morning fishing and so we all retired to bed.

Keep your eyes peeled for the 5th and final part coming next week!