Next morning, we woke nice and early, we cooked breakfast and once again had to return to Tangalooma as this time we were meeting Paul, who had arranged to come across on the ferry and join us.

The run back down the beach, showed just how high the tide had come up the previous night and how the beach had once again taken a beating from the rough weather. Although this time we did not have to run the gauntlet of the waves. 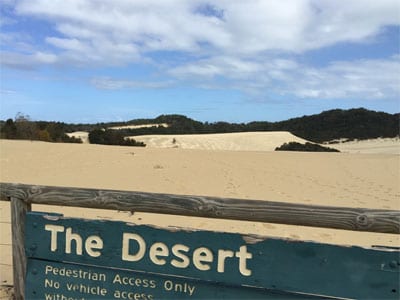 We decided to once again take a short detour, through the Middle Road and visit The Desert. There were some eager visitors who were undertaking some ‘sand surfing’ and some of the group decided to take a closer look.

Paul, in the meantime had disembarked and called us on the mobile phone. Don’t rely on mobile reception whilst travelling around, as this was a classic example of how unreliable mobile phones are, when travelling. After many calls backwards and forwards and a few runs through Middle Road, we eventually met up with Paul on the Eastern Beach. Unfortunately, the wind was not being kind and it was blowing a gale on this side of the island.

We decided to travel further south to once again look at some of the artillery points from the Second World War and on the way down, we passed the skull of a whale, which had been washed up on the beach. Driving on the beach after the rain, really does not present any challenge, the main issues are to try and keep you speed down to a reasonable level and look out for any washaways or other items which may have been discarded or washed up on the beach. At this particular time of year we did not have to worry too much about others on the beach, however, in season, looking out for people walking and fishing or simply sunbathing should be a priority. People often forget that they cannot easily hear vehicles above the noise of the wind and the waves and people are also easily distracted, so as a Four Wheel Drive driver, it is our job to look out for other people on the beach. 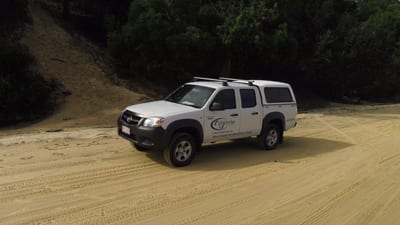 We had a quick stop to look at some of the ruins from WW11 and then we were off again, heading for the lagoon further south and some shelter from the wind so we could enjoy lunch.

We finally found a spot a little inland and sheltered behind the Mirapool Lagoon. Paul informed us that his vehicle had just ‘thrown a drive belt’. So whilst we prepared a quick lunch of some sandwiches and cold meats and salads, some of the guys tried their hand at a bit of softball, whilst Dave, myself and Paul diagnosed the issue on Paul’s vehicle.

The Mazda BT50, has two drive belts, one had broken completely and the other was hanging on by a very small portion. We decided to loosen the belt slightly to take a bit of tension out of the belt, in order to hopefully nurse the vehicle back to the middle of the island. Since we were so close to Kooringal, the most southern town on the island, we decided to take a chance and see if we could source perhaps one belt from there. However, luck was not on our side and there was no hope of finding a belt here. We decided to take a slow drive back up the western beach and hopefully nurse the vehicle back to Tangalooma.

Keep your eyes peeled for part 2 coming next week!