The run up the beach was pleasant with an outgoing tide and plenty of sand to drive on. We made the quick 30 minute run up the beach, stopping to view the concrete ‘gun placements’, which were a remnant from the second world war, when Moreton Island was a strategic location to protect Brisbane from a Japanese air strike.

During its peak 900 troops were stationed on Moreton Island, to protect the approaches to the Port of Brisbane, with both anti–‐aircraft guns and mine control buildings. 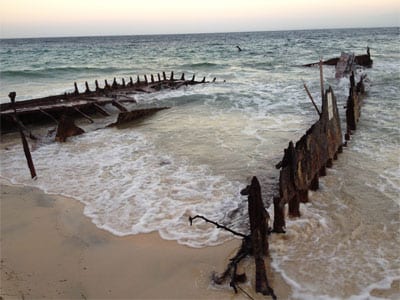 Moving further along, the coastline, we stopped to look at the rain falling over the Sunshine Coast and we could see the Glasshouse Mountains against the skyline, a similar view which must have presented itself to Captain Cook on his voyage as we looked across to Redcliffe, Deception Bay and further towards the southern tip of Bribie Island.

We arrived at a group of wrecks at the beach access to Bulwer, and stopped to have a quick look around. Inside one of the wrecks we found the remains of a sea turtle, still quite intact, although missing one flipper. We explored the wrecks briefly and then moved on to our accommodation at Castaways in Bulwer.

We had booked to stay in the permanent tents situated amongst the trees. These tents take camping to a whole different level of luxury and are known as ‘glamping’ with comfortable beds and their own ‘ensuite’. We quickly took care of the paperwork and unloaded some of our supplies and clothing into the tents. We also put some of our supplies into the fridges in the ‘communal area’ which has all the cooking facilities and space to eat and relax.

Since Steven, had elected to catch the later ferry across to the island, due to work commitments, we had to make the return journey to Tangalooma to fetch him. We took a slightly different route and opted to travel the inland track and visit Cape Moreton and the Lighthouse before returning to Tangalooma and the ferry. 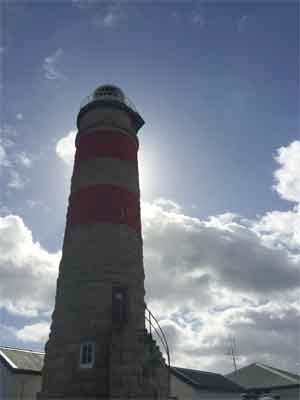 The lighthouse has a turbulent history, being constructed by the convicts using local sandstone. The life of the ‘lighthouse keeper’ was not an easy life by any means, and judging by the fact that the wife died whist giving birth to her 11th child at the age of 36, as well as the numerous grave stones which tell the tale of life and death on the island.

We watched the ferry ‘beach’ and unload another group of happy tourists and campers onto the island. All the vehicles disembarking and scurrying off in various different directions to set up their own camp sites for the weekend.

After meeting Steven, we decided to visit Tangalooma and look around. Since the beach access in front of the resort is blocked off from vehicular traffic, we parked up as close to the dunes as possible and walked the short distance to the resort.

We looked around and enjoyed a quick drink, before returning to our vehicles and once again making the short journey up the beach to our own camp.

The run up the beach was pleasant with an outgoing tide and plenty of sand to drive on. We made the quick 30 minute run up the beach, stopping to view the concrete ‘gun placements’, which were a remnant from the second world war, when Moreton Island was a strategic location to protect Brisbane from a Japanese air strike. As the tide had now turned and it was heading for ‘high tide’ we had to get going quickly and as the light was starting to fade we would drive the last few kilometres with our lights on. The beach had taken quite a pounding with some high winds and surf over the week prior to our arrival, so when the tide was in, there was very little beach left to drive on and we had to drive on the narrow verge above the high water mark. This proved a little difficult at times as this became a little too narrow for our vehicles and we had to ‘drop’ of the rather steep ledge onto the sand and make sure that our timing was just right to run between the waves as they rushed in. Our novice drivers were on a quick learning curve although to their credit, they followed our instructions and shadowed our vehicles every move and safely negotiated some rather large and awkward ‘drop–‐offs’ and washaways. We even had to backtrack a little as we had to drop into the stream bed at one point as the drop off was just a little too steep. A quick turn onto the beach and a race against the tide saw us splash through eventually arriving at the beach exit to Bulwer with only a few minutes to spare, before the ‘road’ would have been impassable until the tide turned once again. 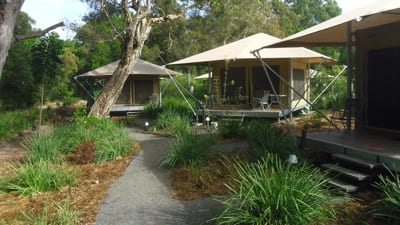 We settled back into our camp and cooked a lovely dinner and then sat around talking until quite late. It began raining quite heavily and it was nice to lie back in the comfort of a proper bed listening to the rain on the roof of the tent.

Keep your eyes peeled for part 3 coming next week!