Our recent trip to Moreton Island on the weekend of the 15th to the 17th May 2015, was undertaken as part of a prize from CTEK battery chargers in conjunction with Bainbridge Technologies, the distributors of CTEK products in Australia. 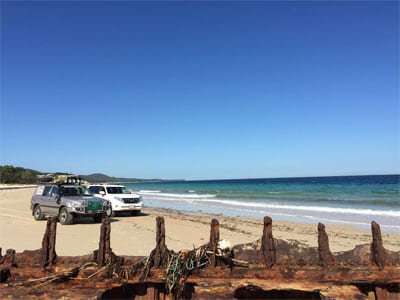 Moreton Island is the third largest sand island in the world. The island is approximately 95% National Park and is about 186 square km. 37 km long from North to South and 9km at its widest point and we saw most of it, this weekend, driving the full length of the island and criss-crossing it several times. The Aboriginal name for the island is Moorrgumpin, meaning ‘Place of Sand hills’.

We had four novice Four Wheel Drive drivers on the trip, Todd, Andrew, Steven and Fawzie as well as myself and a colleague Dave and his son Sam. Paul from Bainbridge Technologies would join us on the Saturday.

The weather was not exactly playing nice for the month of May, with some rain forecast. Although Moreton Island is one of the wettest parts of Queensland with annual rainfall of some 1567mm. This could work to our advantage as it would ultimately pack the sand down a little bit and make ‘sand driving’ a whole lot easier. Bear in mind that Moreton Island has no paved roads and our novices would certainly get to experience the thrill of driving on sand.

We started with an early morning wake up, as we had to travel down from the Sunshine Coast in the early morning traffic, in order to get to the MICAT ferry for the 90 minute trip across the water from Brisbane to Moreton Island. I really do not know how people cope with doing the early morning commute every day. Lucky for us, we had something to look forward to and so we actually enjoyed the trip down.

Our XDrive LandCruiser 100 series was fully loaded with two fridges, stocked full of all the essentials we would need for the weekend trip. We were set for a great weekend. 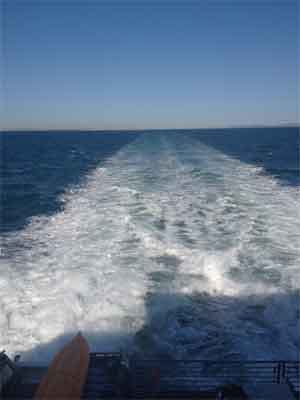 We arrived nice and early, at the terminal and met up with our lucky winners. The barge was full for the trip across, so we quickly loaded up and went upstairs. Once the ferry had left the Port of Brisbane and headed across the water, we went down to the lower deck and dropped our tyre pressures in anticipation of the barge ‘landing’ on the beach. We also handed out our hand held two way radios, as this ensured that we would keep in contact no matter where we were on the island.

The trip across gave us plenty of time to get acquainted and after exchanging all the usual pleasantries we settled in to watch the Brisbane skyscrapers shrink into the distance. The trip was over quite quickly, even although it did take 90 minutes. As usual disembarking from the ferry was quicker than loading and after hitting the beach, just North of Tangalooma, originally part of the old whaling station, we turned sharp left and headed North to our destination, Bulwer.

Keep your eyes peeled for part 2 coming next week!